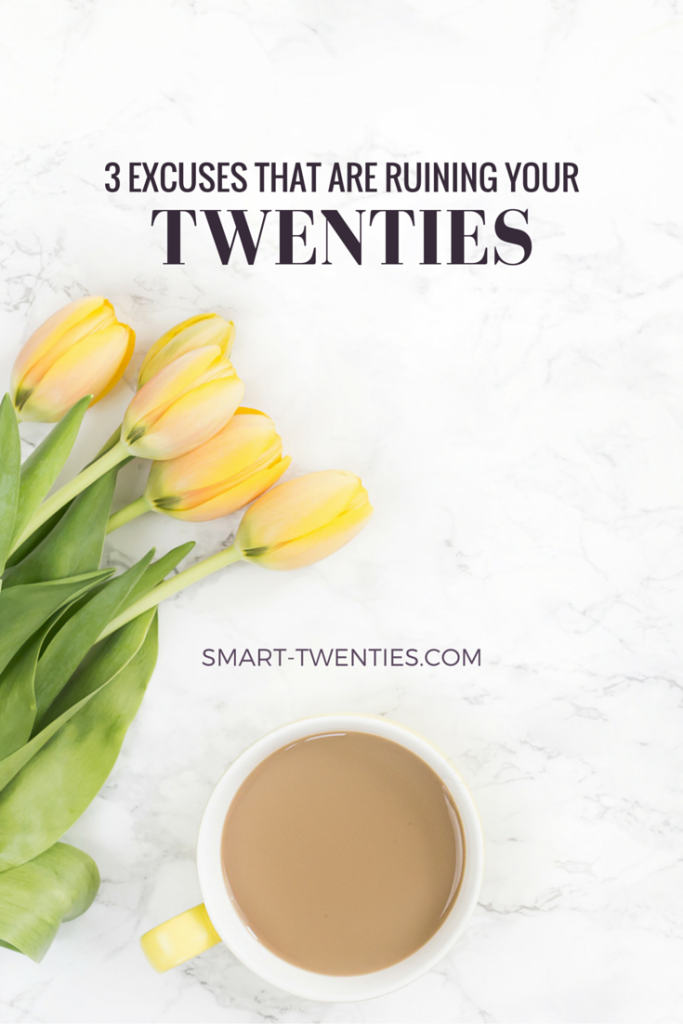 We’re often told we live in a very impatient culture, but I mean, do we really?

I think we can be pretty damn good at waiting for things (read: making excuses).

And these reasons feel super legitimate, but in my experience they’re not. Nine times out of ten we’re just making excuses (and those excuses will end up ruining our twenties).

Excuse 1. You don’t have enough money

Have you ever found yourself saying that you really want to travel but you just don’t have enough money?

This seems legit, how are you going to travel if you don’t have enough money to buy the plane ticket? And you really do want to travel, so how could this be an excuse?

But you know what – travel can bring up a lot of stuff that we really don’t want to have to deal with. We have to ask for time off our jobs. We have to decide who we’re going to travel with or if we might try travelling alone (I highly recommend the latter by the way). Or maybe we don’t feel like we have anyone to travel with and we don’t want to deal with how that makes us feel. We have to face our money problems and actually save money (which means figuring out how to stop buying everything we see in every single one of our favourite YouTuber’s favourites videos).

If you really want to travel in your twenties and you’re not working towards it, why not? Is there some reason you’re putting it off? I think this is definitely worth turning your mind to if you know you’ve said you want to travel but you ‘can’t’ because you don’t have enough money.

Excuse 2. You don’t have enough time

We seem to get caught in the trap of thinking that, at some nondescript but not-too-distant time in the future, we will have oodles of time up our sleeve. And with all of this time we’ll finally be able to do all those things we want to do – get into that gym routine (and actually stick to it), prep all our healthy meals for the week, have time for our friends, and boyfriend, and family. We’ll be reading a book a week but also up-to-date on all our favourite TV shows – and we won’t even have to break a sweat.

I always find myself believing that in the future I’ll have ‘more’ time. And I seem to forget that the periods of my life where I’ve had a lot of this spare time (like when I was a student and I wasn’t going to classes…oops) I was actually the most unproductive I’ve ever been.

I work better with less time – it forces me to organise the time I have and it forces me not to put things off (because if I don’t do them when I plan then I’ll never be able to do them). I have totally romanticised the idea of having heaps of time, even though I know that’s actually not what I work best with. And I know not everyone is like this. Some people are better organised when they’re busy and some people are better organised when they’re not but the thing is, it really doesn’t matter.

There is no point waiting until you have ‘more time’ because you already have all the time you need.

When we say we just need to wait until we have more time, we’re just making an excuse. We’re using the same old easy excuse to put something off (I’m sure you’re already aware, but there are people who are way busier than us who are achieving all the things we’re putting off because we don’t have ‘enough time’)

I feel like I’ve already talked about this idea a lot on the blog already, but it’s something that I’m still learning to do.

But this ‘more time’ is never going to come, you need to start calling yourself out whenever you find yourself making this excuse and start making time for the things you want to do.

How many times have we made promises like this to ourselves? I think this is one of the easiest excuses to make because it really doesn’t feel like one at all – tomorrow will come around pretty quickly so we’re not really putting it off, right?

But I think statements like this are a big part of the reason a lot of us feel so unhappy with the lack of progress we’re making. We have big dreams about what we want to achieve but then we find that a year passes and we’re still in exactly the same position we were a year earlier.

So don’t let yourself put it off until tomorrow again and again and again. Start making little good decisions today and build upon them (and if this is something you struggle with, you might be interested in The Slight Edge by Jeff Olson which was the latest book in the Smart Twenties Book Club).

Can you relate to this?

Have you ever found yourself procrastinating in any of these ways? Don’t forget that comments are always appreciated – I’d LOVE to hear your thoughts on this!