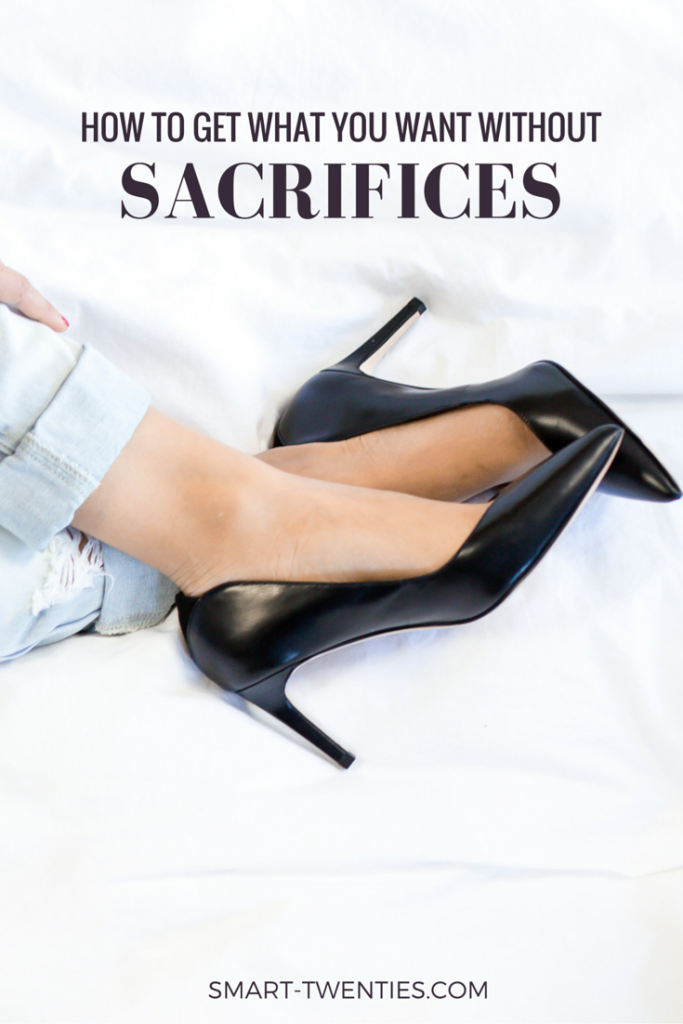 When a lot of different people keep telling you the same thing it can be pretty damn persuasive. And I honestly think that is one of the main reasons we believe so many things that aren’t necessarily even true.

Take the following for example:

My guess is that, at least on a subconscious level, you believe at least one of these statements to be true (if not all 3). I thought all 3 were gospel. We hear people repeat variations of these ‘facts’ all the time and soon enough, it just becomes part of the way we think. We are told that we have to make choices and sacrifices to get the things we want.

We are told that we can’t have our cake and eat it too. But is this actually true?

There are many, many people eating the proverbial cake – they are not trapped by this either/or mindset. This mindset that, mind you, I didn’t even think was a problem until a couple of months ago. I just thought that making choices and sacrifices between one thing and another was just the ‘way it is’ – ‘you can’t have everything!’

And ok, there may be some times that you can’t actually have everything but the number of things that are mutually exclusive are far more limited than we imagine them to be.

Do you have the either/or mentality?

In the last couple of months I have become (even more) obsessed with personal finance books.

I have read Think and Grow Rich by Napoleon Hill, Rich Dad Poor Dad by Robert Kiyosaki and Secrets of the Millionaire Mind by T. Harv Eker (and a few others but I’ll tell you more later). And all of these books – some of the most highly regarded books in the personal finance space – talk about this either/or mindset as a limiting belief.

I think the easiest way to figure out if you have the ‘either/or’ mentality is to answer this question: do you ever find yourself phrasing things like this – ‘yeah I want to do blah but I don’t want to have to sacrifice blah blah to get it’ (for example, ‘yea I want to get fit but I just love chocolate too much!’) and do you say things like ‘you can’t have your cake and eat them too’ as if they’re fact.

The idea that we can have ‘either this or that’ is holding us back.

And before reading these books (1) I didn’t even realise I had an either/or mindset (as in, I didn’t believe it was a mindset I just thought it was reality) and (2) I didn’t realise it was actually a problem.

Many people would say that having an either/or mindset is ‘realistic’ but no one who ever achieved anything worth talking about set out to do something realistic.

Plus, many people aren’t successful – why should we follow the majority?

How to eat your cake (both proverbial and otherwise)

You can have both a good body and eat your favourite foods. You can both love your job and get paid well for it. You can have a successful career and a good relationship. All you have to do is start believing it’s possible.

It will take your brain awhile to warm up to the idea that you don’t necessarily have to make sacrifices. I’m not saying that for every single thing you do there won’t be some kind of sacrifice or choice, I’m just saying that if you start opening yourself up to the possibility that you might be able to have ‘both this and that’ you will be presented with far more opportunities than you could have ever imagined.

Changing my mindset is something I’m working on A LOT.

Every time I find myself deciding between two things I try to think ‘is there a way I can do both?’ Of course there will be times when it’s not possible – sometimes things are mutually exclusive by their nature. But some things that I never thought were possible are becoming a reality all from asking myself this little question and using a bit of imagination.

(Plus it also helps to stop listening to people who say ‘that’s not the way the world works’ or spout the old ‘you can’t have your cake and eat it too’ because when they say that it has nothing to do with you and everything to do with them, but that’s another topic for another day).

How the ‘both/and’ mindset got me an internship

I believe that (finally) realising I had the either/or mindset and beginning to change it is what got me the internships I have been able to secure for this summer (which is soon since I’m in Australia).

I went from having zero internship prospects to being offered more internships than I could accept.

Before I realised this ‘either/or’ mindset was holding me back (or that it was even a real thing) I was really struggling to get applications in on time and there was no logical reason why that was happening. I would just procrastinate until the deadline came and went. I didn’t really know why, I just put it down to laziness or lack of ambition. It took me months and months to realise why I was doing it.

I had the belief that you can’t be successful and have a good relationship.

My relationships are so important to me and I know I don’t want to ‘sacrifice’ them for work.

What I didn’t realise was that I don’t have to choose – it is possible to have both. It’s not easy, but it is possible. They’re not mutually exclusive by nature (some many disagree with me on this and that’s ok, but I really truly believe it’s possible, even if it takes hard work).

I believed (on a pretty subconscious level) that if I didn’t really try to get an internship I wouldn’t have to make the choice between relationships and a career (a choice that many of us feel we have to make).

I also believed, again pretty subconsciously, that if I did an internship that would be it. It would be the final nail in the coffin. I would have to follow that path and I would be stuck doing that for the rest of my life even if I didn’t like it. That may sound dumb but that was honestly what I thought.

I had an either/or mindset and it was paralysing me. I thought it was either relationships or career. Either this or that.

The day I realised I didn’t have to choose between relationships and a career was a Saturday.

It happened during the morning while I was vacuuming the house and listening to the audio version of Secrets of the Millionaire Mind. And as soon as I realised I had that problem I got serious about applying for internships. I hit all the deadlines and I really actually tried.

There are so, so many areas this either/or mindset affects. Health, fitness, career, relationships, education… seriously pretty much everything.

And yes there are some things that are mutually exclusive but trust me, there are a lot less than you think.

Next time you find yourself making a decision and thinking ‘should I have either this or that’, also ask yourself ‘is there a way I can do both?’

Do you ever say things like ‘yeah I really want to get fit but I just love chocolate too much’ or ‘yeah I’d like to have a job I love but I need to pay the bills’?

Do you think you see things as either/or or do you see them as both/and?

Don’t forget that comments are always welcome and appreciated – I’d LOVE to hear what you think!