Let me just say this up front – if you hate waking up early and yet you’re here trying to find out how to ‘become’ a morning person, read no further. This post isn’t for you.

I’m a huge believer in working with what you’ve got. And if loathing mornings is what you’ve got, then why fight it? Why not focus on making more of those night-time hours when you actually enjoy being awake? Why not embrace the fact you function better later in the day? If you hate mornings – becoming a morning person shouldn’t be your goal (it’s nowhere near as glamorous as it sounds).

I’m one of these mysterious ‘morning people’ and I’m here to share how I do it. This post is for people who love the idea of becoming a morning person and are really suited to it too, they just struggle to get there. And this post is about waking up earlier than you ‘need’ to so that you can get a few amazing things done before your day ‘starts’ (like doing some exercise, reading a book, meditating, journalling or just relaxing with a giant mug of coffee and a few of your favourite blogs).

So if that’s you, here are my tips!

Update: Since publishing this blog post, I’ve filmed two Youtube videos that will really help you become a morning person – the first is on the secret to waking up early and the second is on how to get to sleep early. Make sure you watch these if you want to become a morning person and don’t forget to subscribe to my channel if you find them helpful – I post new videos everyday!

There’s something really interesting about the whole ‘morning person’ thing – everyone wants to be one and yet everyone boasts about the fact they aren’t.

If you want to be start becoming a morning person but you always tell anyone who’ll listen how much you hate mornings and that you’d marry your bed if you could – are you really surprised you struggle to wake up early? Every time you say that you hate mornings and just can’t wake up early (whether it’s to yourself or to someone else) you’re setting yourself up for failure.

You have to believe you’re capable of becoming a morning person to be one.

Becoming a morning person is possible, you just have to believe it is.

There’s also an amazing podcast episode by Brooke Castillo called ‘Change and Your Brain’ (you can listen to it here) that is literally life-changing (I could probably repeat this episode to you word-for-word because I’ve listened to it that many times). I highly recommend any of her podcast episodes actually – I’m so obsessed.

2. Have a damn good reason to get out of bed

The first step to becoming a morning person is waking up a little earlier than you ‘need’ to and that’s really what this post is about – once  you’re usually able to wake up when your alarm goes off, the rest is a piece of cake.

Firstly, if you’re trying to wake up early because you ‘feel like you should’ (or because you know a lot of other people that do it) I’m really not surprised you’re struggling. When your alarm goes off in the morning you’re faced with two options: to wake up or to keep sleeping. And if you love your bed and you have no compelling reason to leave your bed – then why the hell would you?

You need a damn good reason to cut short your time in that glorious bed of yours.

The reason I wake up earlier than I ‘need’ to (usually between 5 and 5:30am on a weekday) is because I know I feel better when I do. I know that exercising in the morning puts me in the best possible mindset for the day and that it also makes it easier to make healthy food choices (most of the time).  And I know that while snoozing my alarm might feel pretty damn good in the moment, it also makes me feel super lazy and leads to an obscene amount of laziness throughout the rest of the day.

Don’t get me wrong, there are definitely some mornings that I really just want to hit the snooze button and roll back into bed. These days will happen, even if you’re adamant on becoming a morning person. And it’s on these days that you need a damn good reason to get out of bed.

On Monday morning this week I really didn’t want to get out of bed to go to the gym to do my Kayla Itsines BBG workout (I’m up to week 4). But I got out of bed because this is the third time I’m attempting Kayla’s guide and the first two times I gave up around the 4 week mark, and I’m sure as hell not letting that happen again. So I got up and went to the gym because I had a damn good reason to.

Sometimes we can get a little over-ambitious when it comes to planning what our ‘perfect’ lives are going to look like.

We can just imagine the ‘perfect’ version of ourselves jumping out of bed when that 5am alarm goes off, putting her runners and perfectly-coordinated Lululemon outfit on and heading out the door. Then she’d come home, shower and get dressed in an amazing outfit, with her make-up rivalling only that of her favourite Youtuber. She’d have a super healthy, instagram-worthy breakfast and head off to work without having to rush (probably reading a book on the way to work too).

But when we’re planning what the ‘perfect’ version of ourselves would do, we tend to forget the struggle that will come with wanting to change our habits so suddenly. And we forget that it’s not going to be easy to wake up one hour earlier than we usually do, let alone two.

I’ve definitely struggled when it comes to choosing the right alarm time. I always want to set it a little too early. And when that super early alarm goes off it’s such a radical change that I snooze my alarm and end up waking up at the time I normally would. But instead, if I set my alarm early (but not too early) then I have a lot better chance of waking up when it goes off because it’s not a huge change but more of an incremental one.

So even though you may have amazing plans for your morning routine, don’t set your alarm too early (you still want to be physically capable of waking up when it goes off).

I have to include this because going to bed early is super helpful if you want to wake up early, but I’m not going to go on about it because I’m sure you already know this. But seriously just think about it, it makes sense – go to bed earlier, wake up earlier.

And if you really don’t want to go to bed early then don’t. It’s ok if you’re not a morning person, you don’t need to force yourself to be one just because you think you ‘should’. Focus on making those night-time hours more meaningful rather than dragging your ass out of bed early every morning (and hating it). Work with what you’ve got. Go with what you’re already good at.

If you seriously want to start becoming a morning person, my final piece of advice is to help yourself.

As soon as you wake up – open the blinds, make the bed, wash your face, get dressed, have a giant glass of water. Do anything you can think of that will signal to your brain and your body that the day has begun (my favourite way to wake myself up is to wash my face because it means I’m in the bathroom which means I’m not in my bed – this is progress).

Another way to help yourself is not to set multiple alarms.

I used to be in a really bad habit when it came to this (but my boyfriend Steve hated it so much that he made me stop). Setting 6 alarms at 5 minute intervals is not a clever way to wake yourself up, even if you think it is. You know that there are more alarms coming so there’s no compelling reason to get out of bed when that first alarm goes off. Not only that, your last half hour of precious sleep will be disturbed, restless sleep and you’ll feel even more tired throughout the day.

I still actually set multiple alarms, but I set 5-10 of them at one minute intervals. That means I have to snooze my alarm 5-10 times within 10 minutes if I really want to stay asleep and that’s rarely going to happen. Another trick is just to set one alarm – you know there are no more alarms coming so you’re going to feel a lore more compelled to wake up when that first alarm goes off.

6. Be kind to yourself

And finally, know that even ‘morning people’ struggle to get up early sometimes (well, I certainly do). If you snooze your alarm one morning, don’t let that be evidence that you’re not a morning person – let that be evidence that you’re human. Be kind to yourself and know that there will be some mornings when it’s a huge struggle and that’s ok, you can try again the next day.

Do you want to become a morning person?

Have you been struggling to become a morning person? Or do you have any advice for those people who are? Let me know in the comments below – I’d love to hear from you! 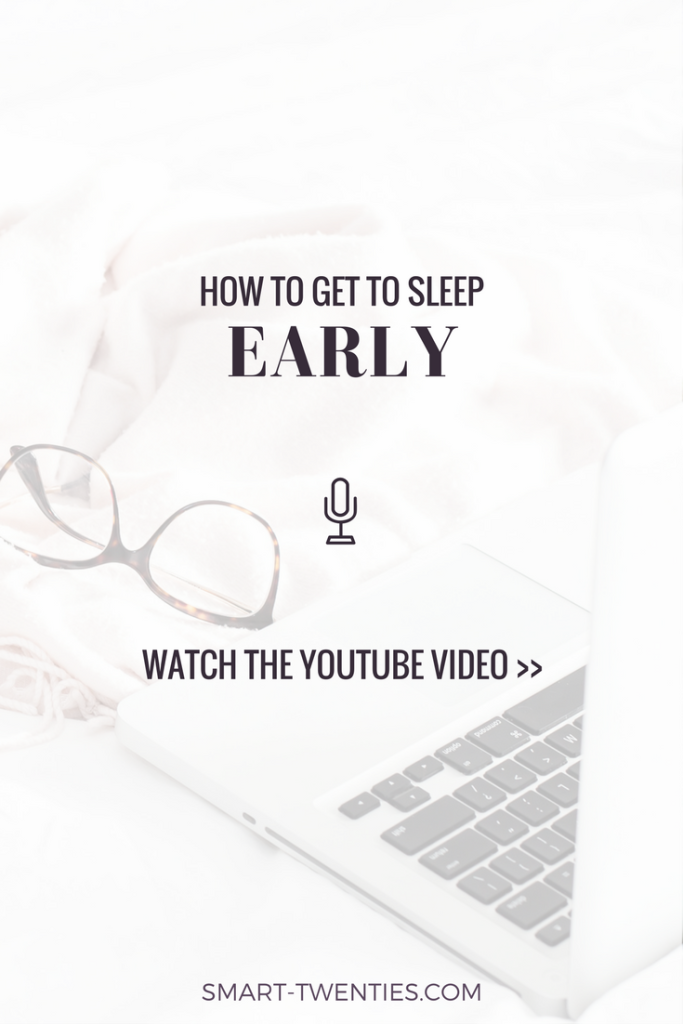 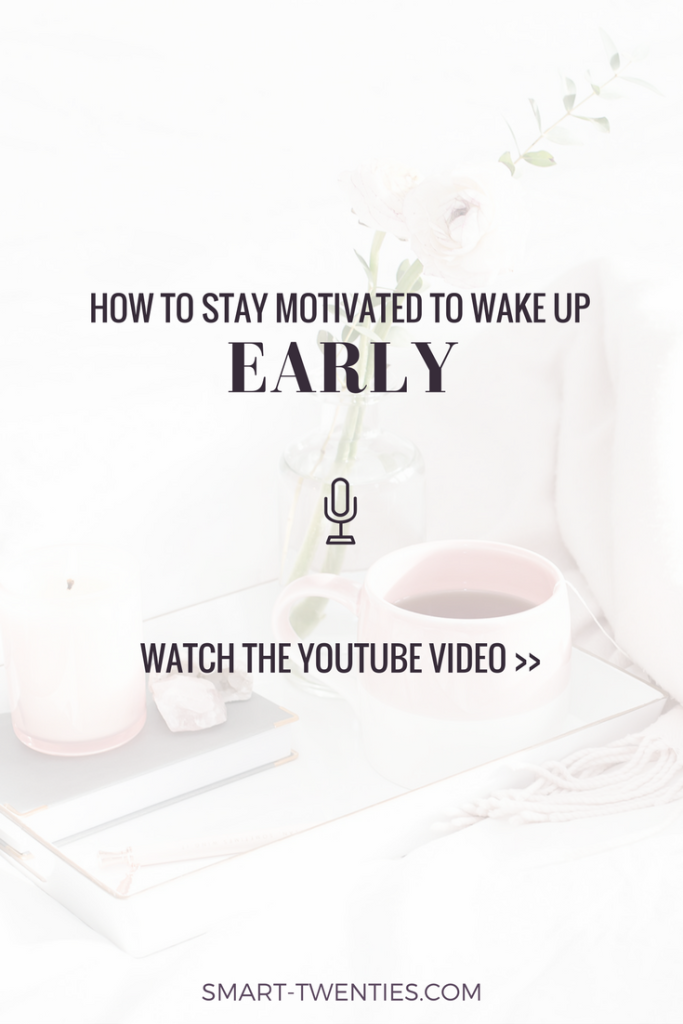 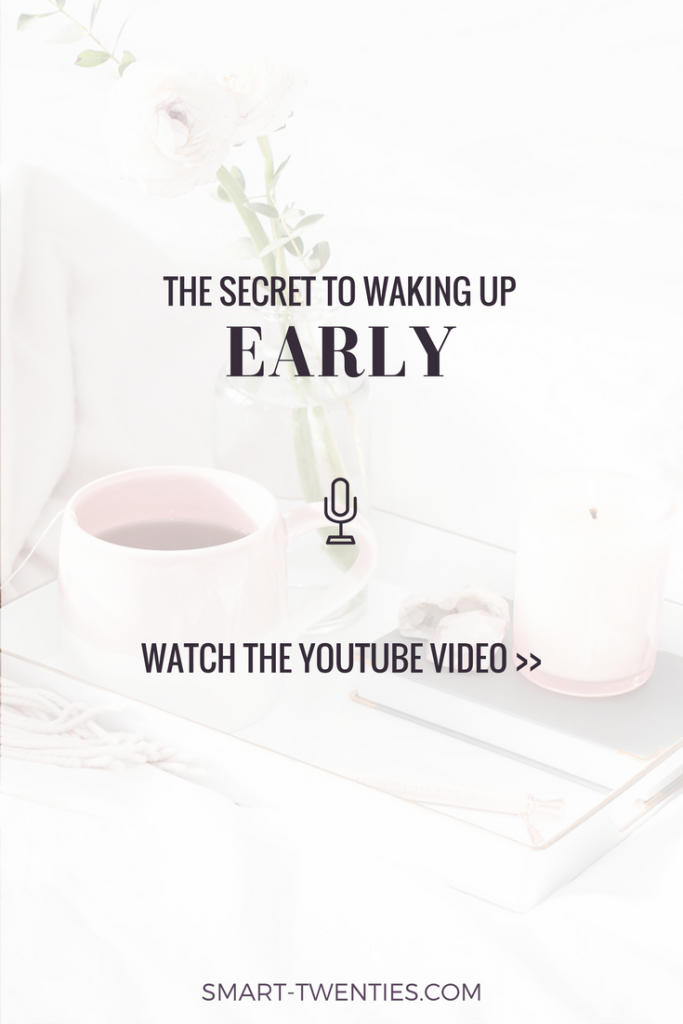 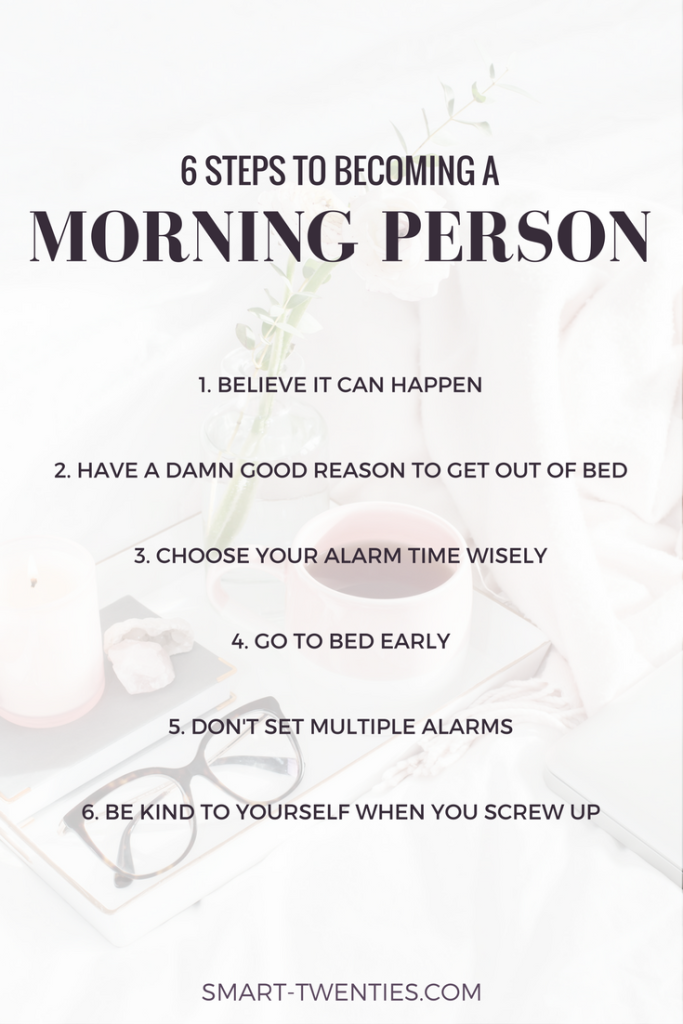 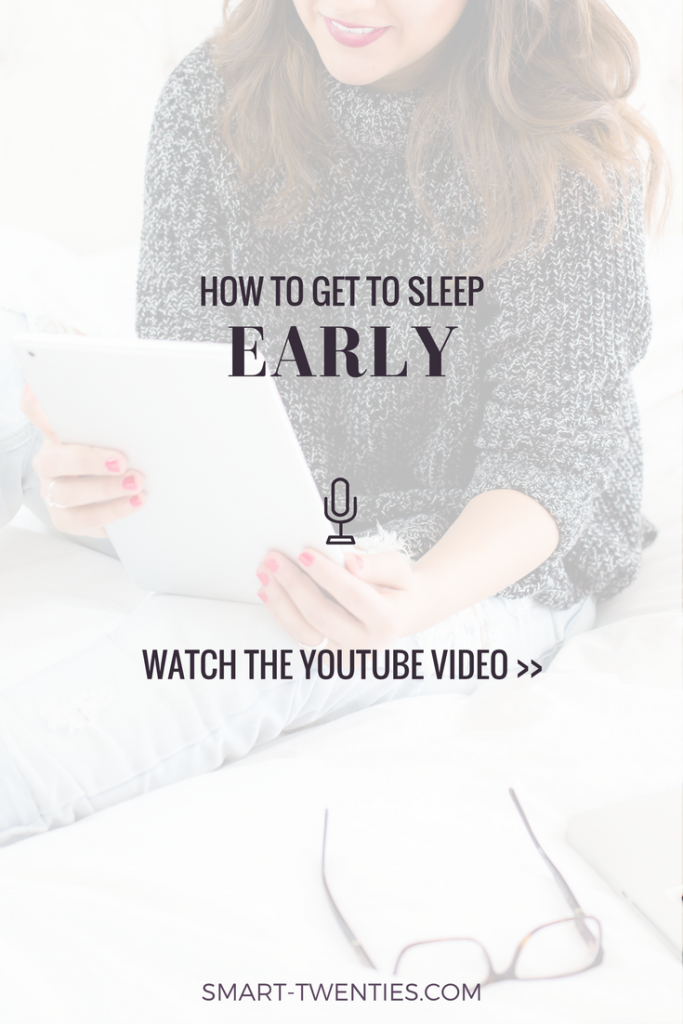 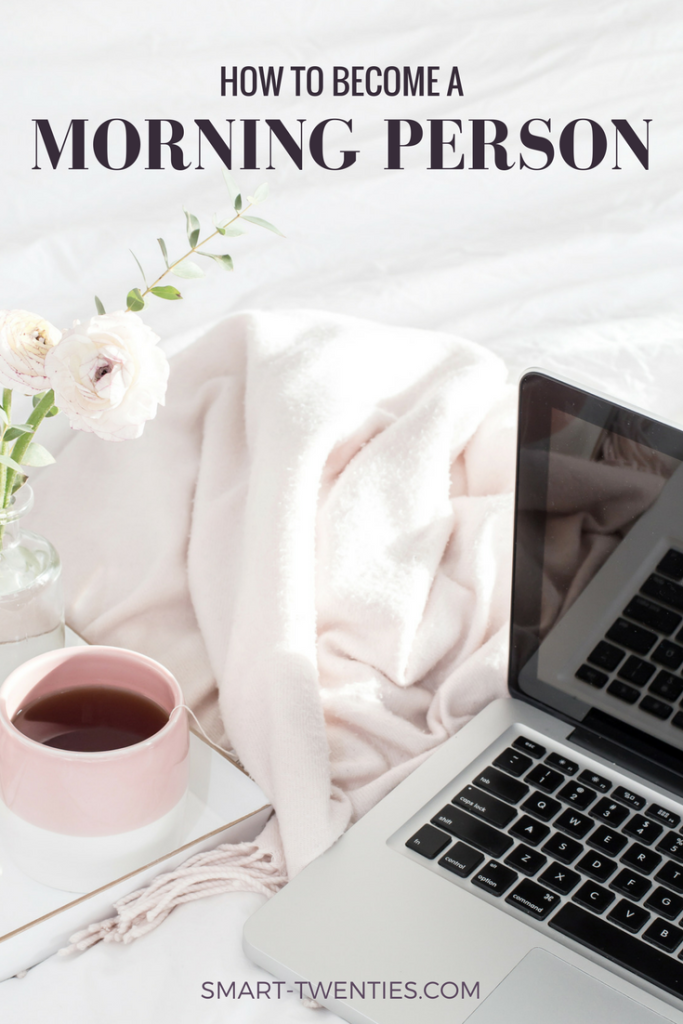