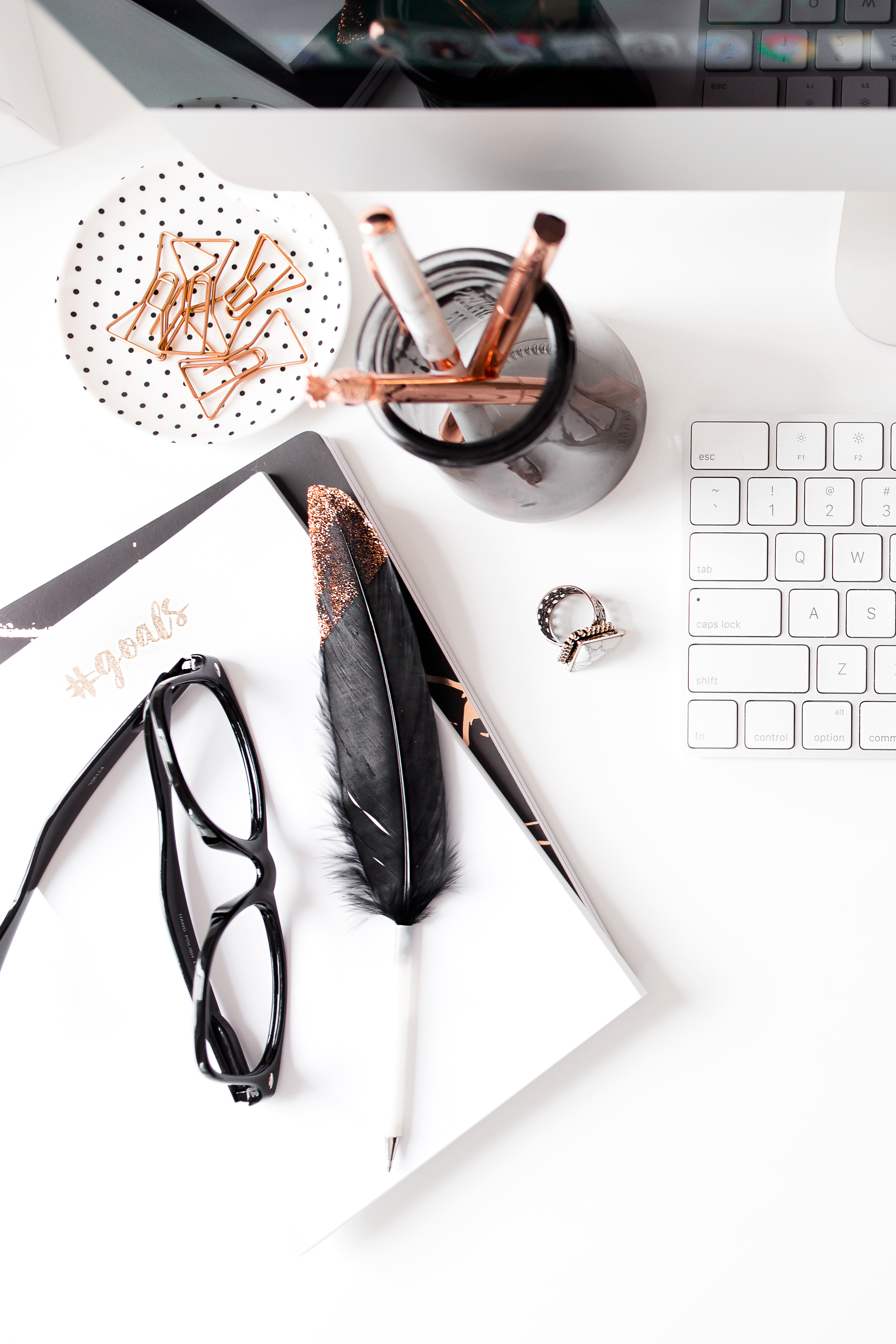 Having an unfulfilling day job completely sucks, but only if you let it.

I’m not saying that you need to trick yourself into loving your a job that you know ‘isn’t for you’ or that you should never leave. No, I’m a BIG believer in chasing your dreams.

But if you think about it, that job you’re hating on is probably someone else’s ideal job (no matter what job you’re in). Which means that it’s not necessarily the job that’s the problem, it’s the way you’re thinking about it.

All I’m saying is that if you’re going to be staying in your unfulfilling day job for at least a few more months, you may as well figure out how you can make the most of it!

Here are some ways you can get the most out of a job you ‘hate’:

1. Learn the skills you’ll need for your dream job

So you have a completely unfulfilling day job – check. You feel like you do the same old shit day in and day out – check. You would way rather be doing something else (even if you have NO idea what that actually is) – check!

But that doesn’t mean that there isn’t a hell of a lot you can learn from your current day job, even if you absolutely hate it.

I’ve had A LOT of unfulfilling day jobs, but I feel like I’ve managed to make the most of them by seeing them as an opportunity to learn the skills I want later in my career.

I’ll be the first to admit I’m not perfect. While I did ask myself these questions, there were a lot of times that I didn’t too.

But I really do believe that I learned SO many of the skills I have today from my unfulfilling day jobs. There are so many opportunities to learn, we just have to look for them.

An unfulfilling day job is the perfect place to hone your networking skills. Whether you’re a lawyer or a check-out chick, you have the opportunity to practice networking with people every single time you go to work.

So does this apply to you if you’re in a completely unfulfilling day job that is in a totally different industry to the one you want to end up in? Fuck yes it does, because you’re just trying to develop the skills.

Here’s what you should do:

Practice starting conversations with people outside of your regular work circle. Practice asking interesting questions. Practice keeping the focus on what the other person is saying, rather than replying with a sentence starting with ‘I’. And practice these skills with everyone you can – from the CEO to the janitor, the customers you see on a daily basis to the customers you know you will never see again.

It might seem like this is a pointless exercise if you want to change industries but it’s definitely not (remember it’s the skill you’re trying to develop here, not the connections).

If you’re not using your unfulfilling day job to practice your networking skills you’re missing an amazing opportunity!

3. Use it to support your side hustle

There’s actually some good news about having an unfulfilling day job – it means you have a day job. And that means that you have an income.

And if you have an income, that means you have funding to support a side hustle.

It doesn’t really matter what your side hustle is, having an income means that you don’t need to rely on your side hustle to pay your bills. And that frees up a whole lot of creativity and creates a lot less stress.

You might think that having an unfulfilling day job means you don’t have time to spend on your side hustle but in almost all cases that isn’t true – it’s called a side hustle for a reason.

And if you’re not prepared to do those things then maybe you don’t really want it, and that’s ok too.

4. Use it as motivation to chase your dreams

As I mentioned at the top of this post, I’m a big believer that we should chase our dreams.

I believe it’s possible to love your day job. I believe you can get whatever it is you want (if you’re prepared to work damn hard over the course of many years and/or decades). I believe you don’t have to settle for an unfulfilling day job.

But that’s what I believe. What do you believe?

Do you believe it’s possible to love your day job, to get whatever you want, to leave your unfulfilling day job? And if you do, what are you going to do about it?! You don’t need to have a clear action plan but you need to make a decision.

You need to decide you’re not going to settle.

There’s a high chance you don’t even know what your dream is. Or that deep down you know what it is, but you’re too scared to admit it to yourself (because holy shit what if you don’t get it?!).

Deciding that you’re worthy of having a day job that you love, of getting what you want and of leaving your unfulfilling day job can be super scary. It’s going to bring up a lot of fear, a lot of doubt and a lot of probing questions from your family and friends requiring you to defend your decision.

You don’t need to know what your dream job is.

5. Realise you actually want to go to your day job

Ok hear me out on this one – you go to your unfulfilling day job because you want to go to it, not because you have to.

So even if you hate your crappy, unfulfilling day job understand that you do have a choice. It’s a small mindset shift to make but it can be absolutely huge in terms of its effect on your attitude. Knowing that you’re at work because you want to be makes it so much better. Even if it’s not a fulfilling job, even if you would rather be somewhere else.

You’re there because you want to be and that makes all the difference.

Do you have an unfulfilling day job?

I’d love to hear from you in the comments – do you have an unfulfilling day job? And if so, how are you going to make the most of it? 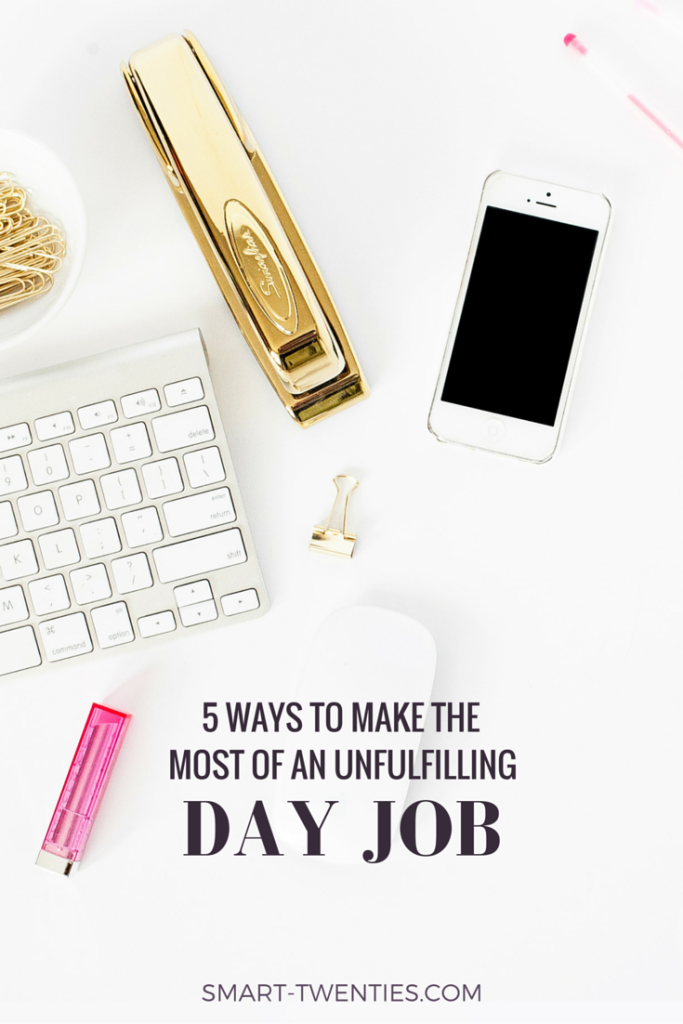